Future Supply Chain Solutions (FSCS), the third-party logistics provider, has been driving superior growth through aggressive expansion in the past couple of years. The earnings momentum continued into Q4 FY19 as the company delivered solid performance, both on the revenue and margin front.

– Standalone revenue from operations continued to rise on a sequential basis and crossed Rs 300 crore in the three months to March, which implies a top line growth of nearly 1 percent over Q3 FY19 and 33 percent over Q4 FY18.

– New client additions, along with mining of existing client relationships, drove the strong performance from its Contract Logistics segment, which contributes around 70 percent of total revenues. During the quarter, the company added a tyre and a lubricant manufacturer to its list of clientele in the contract logistics segment and posted a strong revenue growth in excess of 30 percent.

– Express logistics segment also gained further traction and the segment revenues came in at 8 percent higher on the back of estimated single-digit growth in business volumes. The growth was, however, moderate in comparison to previous quarters. Temperature-controlled logistics was stable on a yearly basis and last-mile delivery and agility solutions (e-commerce, reverse logistics and cash on delivery) witnessed a turnaround at a gross profit level on economies of scale and operating efficiency. 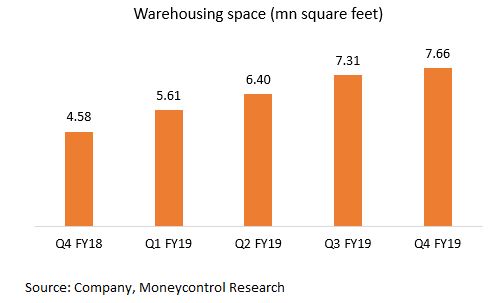 – In Q4 FY19, the company demerged its last-mile delivery business into Leanbox Logistics Solutions through a share swap agreement. Post this transaction, FSCS’ stake in Leanbox has increased to 77 percent, from 45 percent earlier. The financials for Q4 FY19 as well as FY19 have been adjusted to reflect the restructuring exercise. Nearly Rs 30 crore of losses arising from discontinued operations resulted in nil income tax liability for the full year.

– Interest expenses have seen a sharp rise to Rs 6.2 crore in Q4 FY19 from Rs 2.1 crore a year ago as the recent capacity additions have been funded through Rs 200 crore of non-convertible debentures (NCD) which carry 12 percent interest. At the end of Q4 FY19, the company had a cash balance of Rs 124 crore while its leverage position (net debt/EBITDA) was comfortable at 0.7x.

– During the quarter gone by, FSCS added ~0.35 million square feet (mn sq ft) of warehousing space for its contract logistics segment. The total warehousing space at the end of the year stood at 7.7 mn sq ft. Despite the new space addition, revenue per square feet per month was in line with previous quarters. Given the new client additions and strong revenue pipeline, the company intends to add a 2.5-3.0 mn sq ft of the warehousing space in 2019-20.

– The company appears on a strong footing, considering the recent policy changes and revenue pipeline. However, growing concerns of a domestic slowdown continue to pose a near-term risk to the growth trajectory. 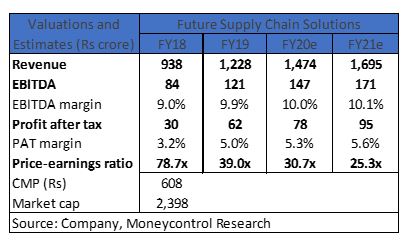 –  Despite a shaky domestic business environment, FSCS revenue visibility remains healthy on the back of its consumer-centric business profile and sticky relationship with its anchor as well as non-anchor clients. In terms of valuations, FSCS trades at a price-earnings multiple of nearly 30 times FY20 estimated earnings.

The stock should be kept on radar for accumulation during corrections as we remain confident of the growth prospects of FSCS and expect top line to drive earnings growth for the next couple of years.

Your supply chain decides where
you stand in the game

Connect With an Expert